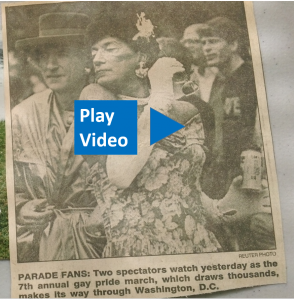 Dave Hill discusses the importance of choosing to focus on the positive side of life and the quirky humorous happenings rather than being caught up in all the day to day negativities. This concept applies to the workplace as well as our personal lives. To illuminate his point Dave shares a funny story about his wedding….there was a challenge locating acceptable bridesmaid’s dresses. After some failed attempts the “perfect dresses” were purchased. Day after the wedding on the front page of the newspaper was a picture of a gay parade. The picture included two transvestites wearing the exact same dresses as the bridesmaids! The picture resides proudly in our wedding album. Points to Ponder:

What are your thoughts and life experiences with this? 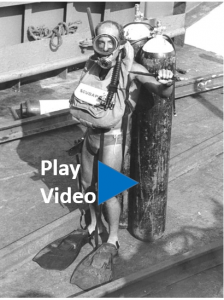 To illustrate this he shares a crazy story of when he was on a diving expedition with the Australia Queensland Museum Divers. They were exploring a historic shipwreck called the Pandora (The ship that captured the “Mutiny on the Bounty” sailors).

A healthy sense of humor is a powerful tool for dealing with conflict. When people are laughing, it is very difficult for them to be angry. You are derailing the train of negative thought. Imagine the relief you feel when someone makes a humorous comment during a tense negotiation meeting. Another very important thing I have learned along my life journey is to push my emotions aside and put myself in their shoes. If I was who they are, how would I feel and act? The third and equally important thing is to evaluate all the options. Think creatively on how a mutually acceptable alternative can be achieved.

Enjoy the video! I am proud of this moment… more details below.

When I was about 25 years old, I was on a scientific ship called the Sir Walter Raleigh with the Queensland Museum scuba divers on a six week diving expedition. We were diving on the Pandora wreck on the Great Barrier Reef in Australia. The Pandora is a famous wreck; it was the ship that was transporting the captured Bounty mutineers (Mutiny on the Bounty) back to Britain, but went aground on the reef. I was on the scientific ship as a volunteer engineer officer working in the engine room without any pay. There was an agreement that in return for working for free, I would participate in the diving expedition. When the ship was anchored near the site of the Pandora wreck, there was tension between me and some of the Queensland Museum divers. They did not want me to accompany them on their dives because it was at a depth of 90 feet. I was a novice diver, and most importantly, I “sucked air” (which basically meant that I used up my air quicker than anyone else and someone had to escort me to the surface ahead of time). They had a valid point, and they were getting angry with my insistence. I was frustrated that I might not be able to dive on the wreck with them again, and I was determined to find a way to be able to dive on this historic wreck.

Somewhere along my life journey, I acquired the ability to come up with creative, wacky ideas that would make people laugh. While working in the engine room on shift, I happened to see a large welding bottle. A flash of inspiration came to mind. With some help from my fellow co-workers, we got the huge bottle up on deck and put it on the aft end of the ship where the divers would get into the rubber dinghies to head to the dive site.

The next morning, about half an hour before the divers assembled on the aft deck, I was fully dressed in my diving gear as I awaited their arrival. When they arrived in a group, there was thunderous laughter when they saw “that crazy Irishman” ready for a dive with more than enough air in his “air tank”! While they were laughing at my mischief, I made my plea. I discussed an alternative plan that would possibly be an acceptable solution to them. I told them that I understood their concerns, that I was sucking air, and that I was making their dive somewhat inefficient. I then offered my thoughts on a solution. I would dive with them, but stay close to the rope that led from the wreck up to the rubber dingy. I would not exert myself; I would just sit on the bottom and watch. In the event that my air consumption was still excessive, I would signal to my dive buddy and go up the rope alone to sit in the dingy.

What can we learn from humor and negotiation

A healthy sense of humor is a powerful tool for dealing with conflict. When people are laughing, it is very difficult for them to be angry. Imagine the relief you feel when someone makes a humorous comment during a tense moment. Another very important thing I have learned along my life journey is to push my emotions aside and put myself in their shoes. If I was who they are, how would I feel and act? The third and equally important thing is to evaluate all the options. Think creatively on how a mutually acceptable alternative can be achieved.

When tension in the workplace is not managed correctly, there can be a gradual erosion of respect and trust amongst employees as well as other destructive mechanisms such as:. 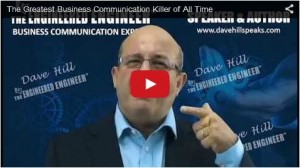 Dave Hill discusses an extremely important communication skill….the ability to apologize and take responsibility for a mistake. To illuminate his point he shares a hilarious story of when he “messed up” early on in his marriage, and how he managed to get out of the doghouse. 5 fundamental success strategies when you make a mistake are:

The Greatest Business Communication Killer of All Time

Dave Hill provides a funny anecdote of a discussion he had with his son about phones that required the involvement of an operator.   He then discusses the fact that phone technology has advanced however business communication practices are not always taking full advantage of it. He provides an example of ineffective communication during the early stages of a project development.   Workplaces can encounter tedious inefficiencies and even festering working relationships when using e-mail instead of picking up the phone or conducting face-to-face interactions.

What are your business communication success strategies regarding e-mail v phone v face-to-face?

How a “Fool Stunt” Helped Me Connect With People and Succeed In Very Unusual Ways! 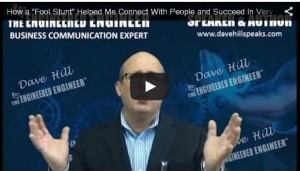 People often question whether it’s appropriate to use humor in the business world. The correct response is, “Only if you want to be effective and successful.” In this video Dave Hill provides a very funny example of a potentially high anxiety business situation where lightheartedness “crept in” and turned this into a memorable interaction.
When used appropriately, incorporating humor helps keep people fully engaged. Humor can help you come across as more authentic, which in turn helps people like and trust you more.  Remember, if people are going to buy your message, they have to first buy you.

Use humor and lightheartedness in business communication to: